Brr… Yesterday it was 2 degrees with a wind child of -10. This morning it was 40 degrees. We took advantage of the much warmer temperatures and headed outside. Although it began to rain, we still enjoyed sledding for the first time this year. The children also became very curious about a large section of the field that had iced over. They decided it made the perfect skating rink.

We had the most perfect snow for our Forest 4s this past week!

At Morning Meeting today we were discussing the upcoming change in weather.  For those of you not in our locale, it is 56 degrees here today with rain.  Tonight, this will change drastically.  We are expecting up to a tenth of an inch of ice this evening with 3-6 inches of snow tomorrow and a high of around 17.  I posited the question, “Where does the ice come from?” (They weren’t too keen on my idea that the ice came from trays in the sky.)

When they decided that it came from the sky and the rain, I wondered where the rain came from.  One of the children offered that it happened because of the water cycle.  She then explained to us that the water cycle meant that the water on the ground evaporated, went up into the sky, made clouds, and then fell back to earth.  We tried to find an explanation of “evaporate” and only came up with “you need to have something yellow, like the sun” to make it happen.  Finally, another child explained that the sun made the water hot and turned it into vapor.  The vapor then goes up to become the clouds and the water vapor parts bonk into each other and get heavier, making it rain.  (I still think my idea that there is a big watering can sprinkling water on the Earth is more interesting.)

Then I began to wonder where the snow came from.  It took a bit of thinking, but it was finally decided that when it is cold, the water “melts” and turns into ice which turns into snow.  I foresee some experiments in our future. 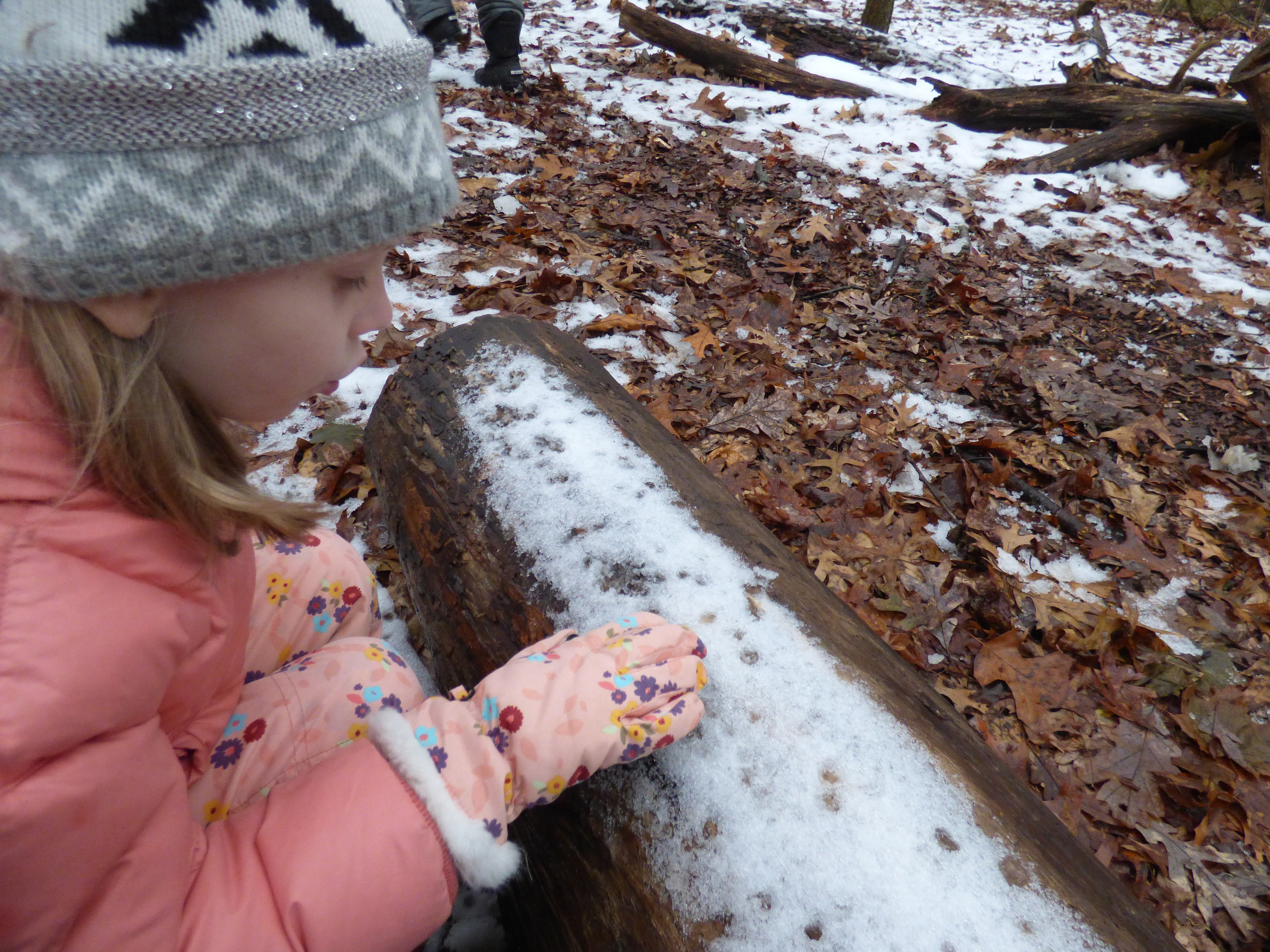 Questions certainly arose when these small, round marks were found in the snow.  Many had the idea that they must be tiny footprints made the night before.  A host of animals were put forth as the culprits.  We’ll have to keep an eye on the phenomenon and see if we can gain more clues.

It was a blustery, wintry, picture perfect Forest Fours day today! Not only was there enough snow to finally go sled riding, but it was also great packing snow. We had giant snow balls and snow-people galore and many discussion about where the fairies go for the winter. We couldn’t have asked for a more perfect morning. I think it’s safe to say that our little snow bunnies quite thoroughly enjoyed themselves.

Now that the weather is starting to become colder, snow and ice have made it’s way to our playground!  The list below are things that will help our children stay warm and cozy on these blustery days!

Your child needs:
Once you bring in snow boots, we will send home your child’s rain boots in their backpacks. Please make sure that all items have your child’s name or initials in them so we can keep track of everyone’s belongings.
This is also a good time to replace your child’s extra clothes box with long sleeved shirts or sweaters and pants if you have not already done so.
Thank you for your continued support!

Or rather, THESE moments.

The children discovered a large pile of ice chunks today. Within five minutes, everyone in the class was involved in excavating the various shapes and adding them to collections.  Many ideas were attempted to dismount the ice from the surrounding snow.  Sticks were used to pry up the edges.  Shovels chopped at the large swaths of ice covering the grass.  Ice found on abandoned sleds was dislodged through semi-gentle whacking upon the porch. Getting the ice to its destination was another feat, altogether.  At first, the children carried individual pieces to their collection points.  When that proved to be too laborious, sleds were employed for the purpose.

The collections were varied and ran from large to small.  Some children aimed to claim as many pieces of ice as possible.  Other groups gathered the largest chunks they could find.  One child carefully chose the three she thought were the most beautiful.  The grand purpose of most of the collections was the process of finding and gathering the ice.  A few, however, did choose to add their ice to their in-game play scenario.  The picture below with the crushed snow/ice belongs to a story of cooking and preparing for a party. You know that fake snow you see at the dollar store? We decided to buy a large tin and try it out in our sensory tub.  The children tested it first to see how the material feels prior to adding the water.  Each child had the opportunity to feel the texture. They described it as feeling like sugar or salt, soft, rough, hard, warm and bumpy.

Next, we added water a little bit at a time.  With each pour, the small “snow pellets” swelled and absorbed all of the liquid.  Our directions were for using only two teaspoons of mixture at a time with two ounces of water.  Since we wanted to use the entire container, we experimented with the amount of water needed.  We kept adding water.  The mixture continued to expand.  We added more water.  It still grew.  One and a half gallons of water later, we have at least 50 times the snow we began with.

Tomorrow, everyone will have a chance to play with the new “snow.” We’ll keep you updated on their observations.