The children were trying to figure out how they might convert our loft into a more comfortable spot for hibernating or adapting through the winter.  A few ideas sprang forward including making a burrow under the bottom, creating cave walls on the lower portion, and making beds in all areas.  While a few debated the possibilities, another group began scouting out the top of the loft.  They explained that they needed to find materials to make a nest that they wouldn’t fall out of.  Their plan was to create a nest and suspend it from the balcony banister. Thankfully, they realized the trouble with flimsy grass-like materials in creating suspension beds before any human trials were put forward.

Feeling that I might be able to provide them with some more safe examples of nest building, we pulled up good ‘ole Google images and perused nests of all sorts.  Now our interest became more fully grounded in materials.  Our quest to create the perfect nest began.

This project is not yet done, but if you’re interested in making your own, here are the materials we used so far:

We moved it into the box as none of the children have yet come up with a plan for “sewing” (their words) or sticking the nest together, yet.  Although one enterprising student did suggest that I could tie all of the pieces together….  I think we’ll see if they come up with another suggestion.

It’s official, our box has become a boat!  It all began with an enthusiastic engine design and a wave of imagination.

So far, we’ve added navigation equipment (“It’s radar, Mrs. Forst, it shows where the water is, where the land is and where the boats are”), door knobs, handles, a “buoy” (“You throw it in the water to get people who are in the water”), a stool for the driver, lots of ropes for various jobs and a steering wheel.

The children were interested in attempting to cut the box by themselves and found it was much more difficult than it looked. 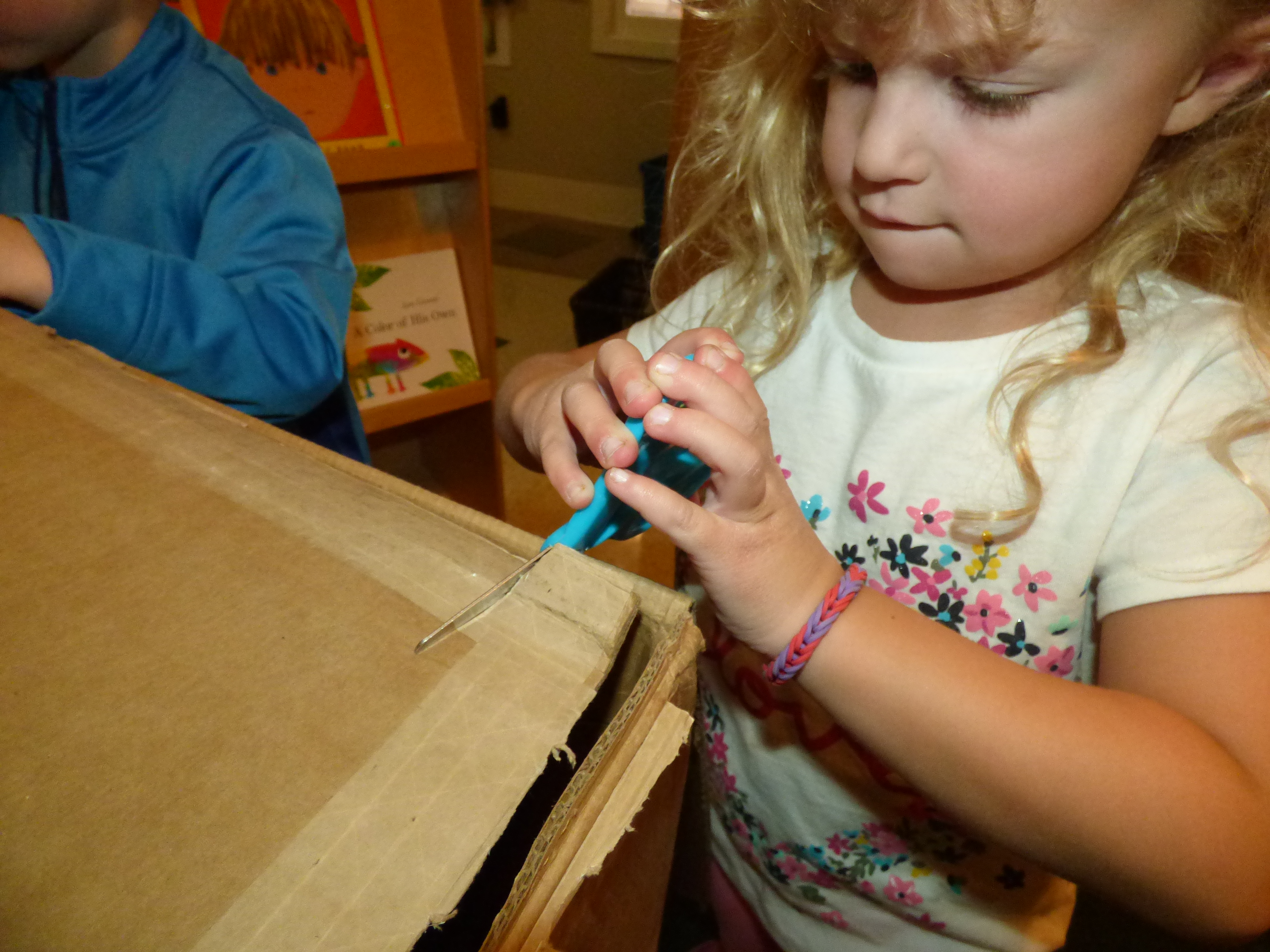 Corrugated cardboard isn’t very forgiving to small hands.  Luckily, my trusty box cutter did the job. (No worries, safety precautions were taken and children watched from afar as I sawed my way through our sea-worthy creation.)  The children marked each space they wanted removed, cut or bored-through.  I did my best to match their schematics.

One of the ideas for the box included an animal shelter where we could get dogs and cats.  With that in mind, one of the students asked for a “cat hole” so the pets could get in and out of the boat.

Halfway through our work, the children decided to see if they all could fit inside.  The first attempt involved squishing and smooshing while they all tried to sit down. 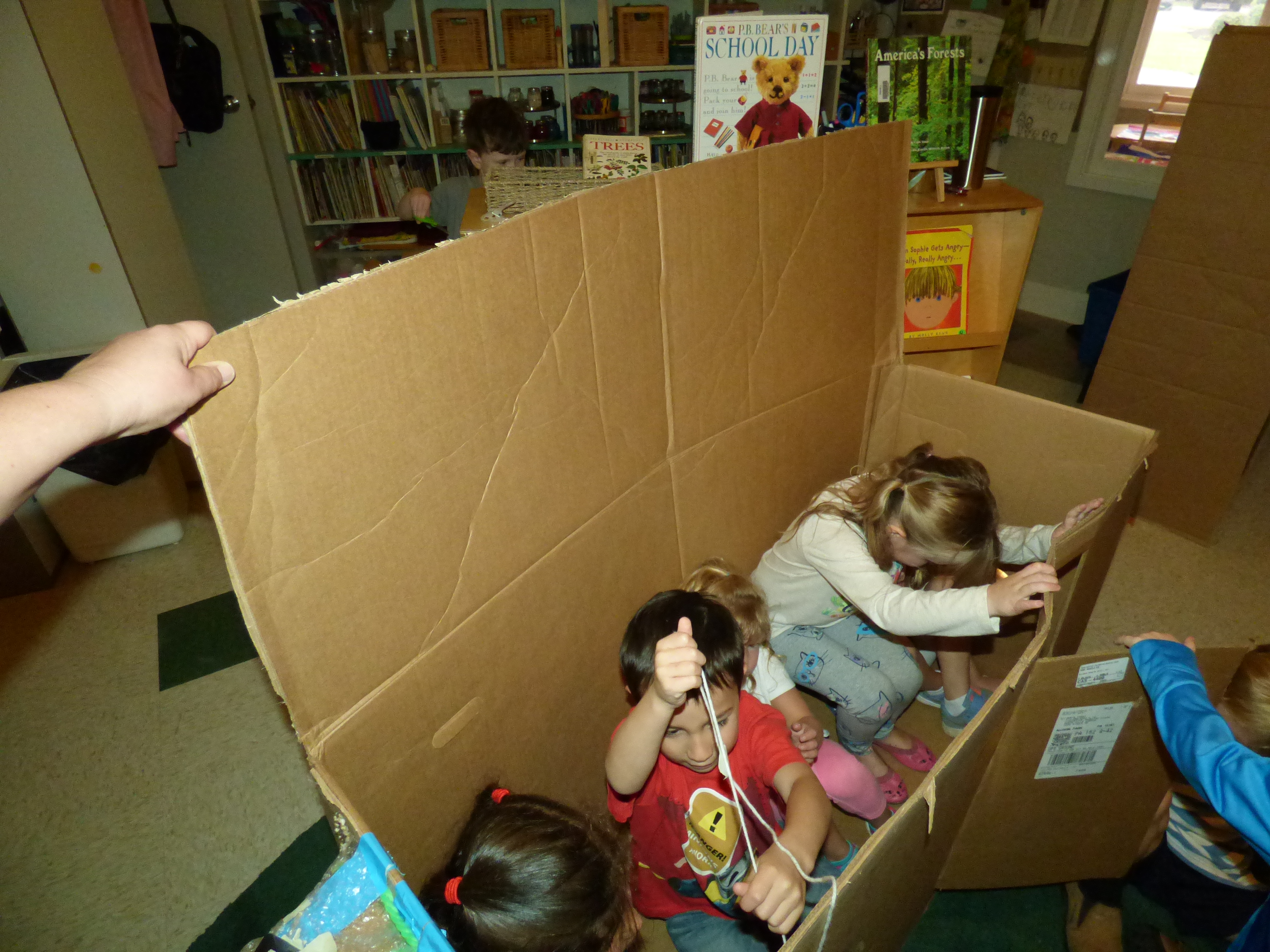 After five adventurers, it got a bit crowded so I asked my favorite question, “How can we solve this problem?”  “Stand up,” exclaimed one excited sailor.

It worked! All of the children present during this construction fit.  We’ll have to check in on our boat project over the next week.

This morning, a group of students spent a large chunk of their morning play time designing and implementing a classroom pet store. The students worked diligently to draw various pets that could be sold and decided together how much each pet should cost. It wasn’t long before they pulled out the cash register and started making money and credit cards that people could use to purchase the animals. The name of the pet store is still up for debate but lots of ideas were tossed around. The look of excitement was clearly present on each of their faces and we are anxious to see how this pet store will grow and prosper within the classroom.

Yesterday, we took a trip inside our blood to learn about it’s composition. We put our items in the middle of our circle and explained that each of these items represent something that lives in our blood. We started with the large container of yellow water, which we were pretending was our plasma. We explained that plasma is a watery like substance that makes up large portion of our blood. At first, some students were not sure how it could be in our blood because it was not red, which lead us to our second ingredient: red blood cells!

Next on the list were the white blood cells (white beads). We then discussed how our white blood cells are the “soldiers” of our bodies that are always working to keep us from getting sick and help your body get better when you do have a cold or the flu. 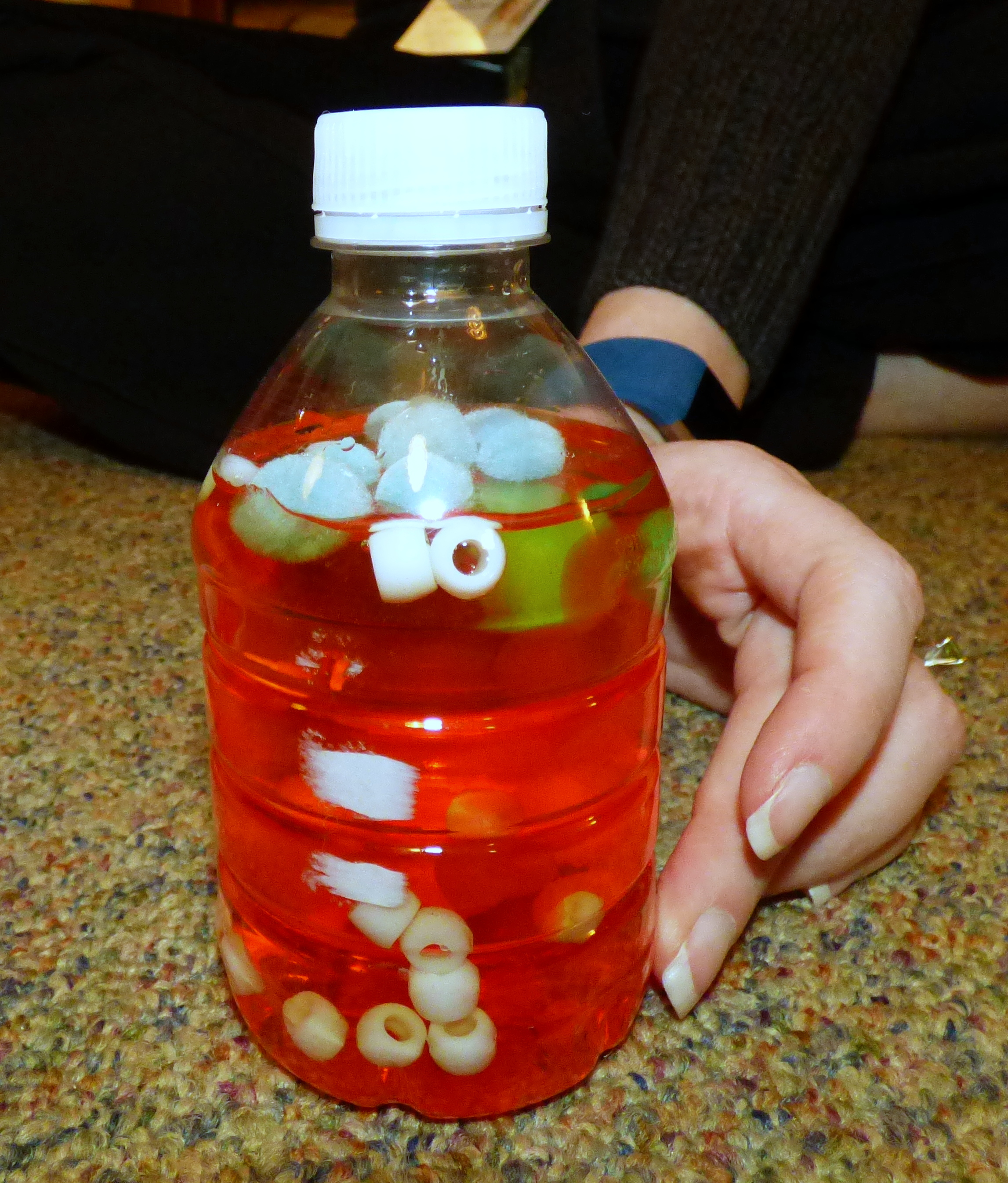 Lastly, we discussed how our blood needs platelets (blue pom-poms) because they help our bodies create new skin or scabs when your skin is cut. Each child scoured their bodies for an old boo boo that they could share with the class and naturally they all had an elaborate story to go along with them.

Now that our students have spent some time learning about the composition of our blood, it’s time to learn about how the blood moves throughout our bodies. Bring on the giant, tape, floor heart! Hint: here’s what it looked like last year!

Today, we introduced the students to a new chapter of Forest Fours by implementing a writing component to our day. Each child received a special journal that travels with us while on the trails. The students are allowed to draw pictures of the games that they are playing, the structures they build, or the specimens they see while out in nature (fungus, birds, rocks, deer, etc.). They also are allowed to collect things like leaves or small pieces of moss and tape them into their journals for safe keeping.

In addition to the journals, we borrowed four Polaroid cameras from Mrs. Weber so that the students can take pictures of items that would be too big to fit in their journals. The pictures are then taped onto a page and the students write about what they observed. The journals will travel with us each time we venture into the woods and the children are allowed to fill their journals to their heart’s content whenever they deem it necessary.

Since it’s inception, our class has used Forest Four days to play in an unstructured setting so that they could explore and create at their will. The addition of the forest journals allows students to extend their learning by giving them the opportunity to write, even while outdoors. Through this activity, the students are practicing skills such as fine motor development, phonemic awareness, self-regulation, observation, categorization, identification, and much more. We look forward to sharing our journal entries with you in the future!

Goodness! We have had a whirlwind of discoveries this week. We’ve found “frogs” hanging out on our log circuit, mysterious yellow goo appeared on the wood chips, towers of blocks curiously refused to crumble, and the ramps in the construction zone have found configurations unseen before.  Oh, and I almost forgot! There has been a rash of author sightings within these four walls.  With so many options, it’s hard to choose what to research next…

With each new year, and new group of students, I’m always so fascinated to see what types of games the students create with one another. Sometimes it’s a classic game of tag or “cops and robbers” but more often it’s a game that they created from their own imaginations. This year, many of the students were interested in collecting seeds from around the nature playground. When asked why they were collecting the seeds, they responded that they were for the animals to eat at the animal restaurant.

Since that day, the children have been working diligently to create different confections for the animals to eat. Some children helped by gathering a variety of natural materials for the kitchen such as rain water, grass, sand from smashed rocks, wood chips, acorns, pine needles, dirt, rocks, and what they had decided are lemons (but are actually walnuts). Once the materials were gathered, they students took turns adding them to the concoction they were working on at the moment. Some days it has been a cake, other days it has been a stew or a salad.

As other children have been inspired to join in the fun, new animal kitchens have popped up around the nature playground as well. A new animal restaurant was created yesterday in what we refer to as the”mud kitchen”, except that this restaurant has a twist. The animals that eat the food from the mud kitchen gain special powers like rainbow powers and storm cloud powers. Animals that wish to dine in this restaurant can use their special power to ward off bad guys that they may encounter in the woods.

We are very excited to see where this game will take us in the following days or even weeks. Tomorrow we will be working on making signs for the restaurants. We will continue to observe the children working in their animal restaurants and hopefully we can find a way to turn this wonderfully imaginative play into a full-blown unit of study. We will keep you posted as the play progresses!

After we returned from the Aviary, our students wrote in their journals about their favorite part of our trip. Below are their answers.

Yesterday, our class traveled to the National Aviary as a culminating activity for our study of birds. The students were surprised to see that many of the birds were not behind cages but actually were able to fly/wander around the room as they wished. Some birds kept their distance, while other birds tried to camouflage themselves within our group so they could escape the room! We learned that some birds eat fruit, seeds, and worms while other birds eat the meat from dead animals and how important they are for our environment. The class was treated to an up-close encounter with a zealous vulture who enjoyed jumping down from the trainer’s arm to check out the reflexes of our students. Some friends that were lucky enough to feed mealworms and fish to the birds in the Wetlands room and we all had the opportunity to feed a bowl full of nectar to the Lorikeets. Some students were a little nervous having the birds so close to us (the Lories actually land on your hand to eat) but all students persevered and were calm and respectful to the birds. One student, as we walked out of the Lorikeet room, exclaimed, “That was heaven!”.

During this field trip, our class also had the opportunity to participate in a project that Mrs. Weber has been piloting, called Big Shot Camera. WT purchased cameras, which arrive disassembled, and the fifth graders worked to build them into functional digital cameras. Mrs. Weber then has spent time with each class teaching the students how to take pictures of the world around us. Our class chose to use the cameras to take pictures of the all the birds they saw during our trip.

We were so proud of our Pre-K class throughout this trip. Not only were their many other schools visiting the Aviary, but the students were challenged with being so close to these unusual animals. The students followed all of the directions, showed calm, listening bodies, and truly showed us how much they have matured over the course of this year. It is very clear that our students are ready for next year.

So, if we are going to be building all of these flying machines, where can we find the materials the children will require?