I recently added some foam corners, left over from packaging, to the construction zone.  I thought they might make for an interesting addition to buildings.  As is usually the case, the children had much grander plans.  Requesting something to stick into the foam, I provided them with craft sticks.  Delighted, I watched as they proceeded to impale the sticks into the sides, using them to attach pieces together.  Many creations came from these experiments, yet somehow I only managed to capture this one on film.

The child who made this eagerly explained his design and wished to display it in the class.  He then wrote a label so anyone visiting would understand his sculpture.

We met with our fourth grade book buddies for the first time today.  This year, Mrs. Ferguson (the Fourth Grade teacher) and I are hoping to get together at least once every six day cycle.  Right now, we’re are scheduled to meet on Day 2.

This tradition is held very dear here at WTN.  All of our grades have reading buddies.  The elder children get the opportunity to model literacy and be a mentor for the little ones.  The younger buddies love having the one-on-one attention.

We introduced our listening center last week.  It’s an antiquated, child-friendly, audio-tape player.  The children love the independence of being able to listen to a story by themselves.  After a ten minute explanation about the “play” and “stop” button and how to care for the headphones, we sent a small group off to listen to “The Three Billy Goats Gruff.”

None of the buttons worked!  The power was on, the tape was happily in the machine, but the wheels wouldn’t turn.  No playing, no fast forward, no story. Well, as they say, when life give you lemons….

We found the same book read-aloud on YouTube, but we wanted to make the experience special since they’d lost the use of the headphones.  Enter the mini-theater. 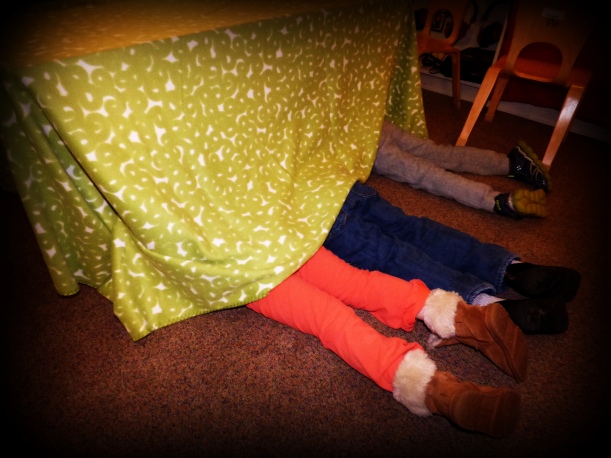 It’s not so quaint as an audio-tape player, but they seemed to like it. 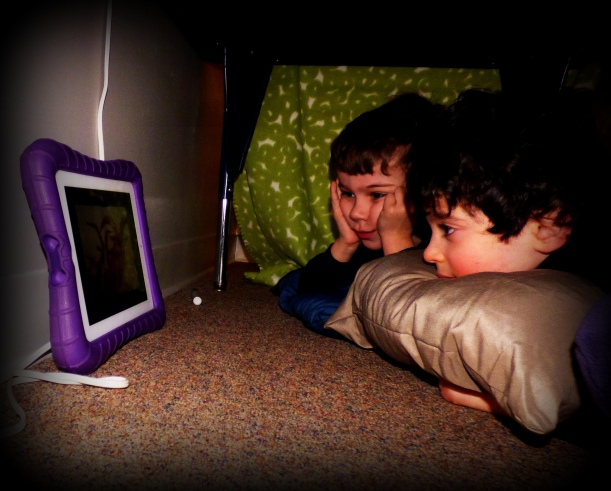 This summer I spent  a weekend at Presque Isle with my close friend and our four boys.  While the boys were burying each other up to their necks in sand, I was sifting through the plethora of smooth stones lying at the water’s edge.

There were so many shapes and sizes, but the generally flat surfaces were the most intriguing aspect.  I meticulously gathered a little over 75 small flat stones over the course of the trip.  My goal was to create two sets of the alphabet for our class.  I found circular ones that would be perfect for lowercase rounded letters.  Slightly longer, ovoid rocks would serve for tall, thin lower and upper case letters.  The largest stones would be perfect for wide capitals.

My collection lived in one of the many buckets the children had been toting around. (Are you feeling the foreboding?)  While I was in the water with one of the boys, the others were back at the blanket, playing with trucks in the sand.  Upon returning to our encampment, I found the bucket I had been using emptied and now being used as a chair.  The littlest of our tribe had decided that the stones needed to be buried so pirates would not get them.

We spent the next 1/2 hour digging for “treasure”.

In the end, we made it back to Pittsburgh with enough stones for sets of capitals, lower-case letters, and zero to ten numerals.

We recently set our alphabet stones out on a side table to see what might happen.  As can be expected, the first words the children tried were familiar and important: their names. 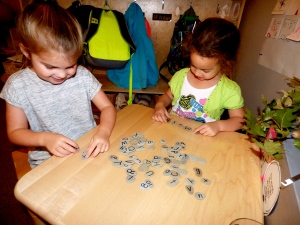 And yet, we must not forget other important words in their lives.  Two boys were about to head out on an adventure with their families.  As I was walking by the stone table near lunch this is what I found.  One guess where they’re headed.

One never knows what to expect from lunchtime conversations.  Some days, the topics range from magical stories to regaling recent vacations. At other times you might hear discussions on “current events” such as whose birthday party is coming up next  or “Do you want to play ‘What Time is it Mr. Fox’ at recess?”  It can be quite fun to eavesdrop on the discourse of children.

The conversation circling the lunch table today was a teacher’s dream.  Before us was the ideal moment when play, language, child initiative and learning collide.  We were still getting food settled on the table when we became aware of the discussion.  One of the children was commenting on his family.

“My Daddy is handsome, my Mommy is pretty and I’m handsome, too!”

This lead to a numerical comparison of male and female household members.  All participants offered up their gender breakdown.  There were connections made, patterns discovered and people counted with 1 to 1 correspondence.

“I have two boys and two girls.  One of the boys is my cat.”

This discussion quickly morphed into word play.  The children began creating rhymes for their names, practicing letter substitution by replacing the first letter of a name with a new one.  Within seconds, members of the group noticed the class names on the window.

And just like that, a single discussion bounced through many learning trajectories.

This entire interaction took no more than six minutes. It involved five children and no adults.  (Mrs. Pless and I were watching with rapt attention three feet away, unnoticed by the diners.)  Yet, this conversation included more instances of mathematics, literacy language and practice than we could hope for in a teacher led discussion.  Not to mention all of the social, emotional and physical practice each student underwent during this short snapshot of lunch.

Children are amazing in their ability to learn.  They do so with or without our input.  They will practice what they know and push ideas further.  Our surprisingly simple job as adults is just to provide them with the tools, be it language or concrete experiences, and support while they grow.

“Can you tell me what to write?”

Pre-Kindergarten children frequently utter some mighty disparaging words. One of our first tasks in Pre-K involves teaching young children what writing really is.  We must show them that four-year-old children write in many different ways.  For instance, each of the lines below say, “I love my mom.” All of these (and many more) are ways that English speaking young humans communicate through printed symbols.  We often take it for granted that drawings are a way of writing.  What is a drawing if not an abstract symbol of a more concrete object or idea?  A child who is “drawing pictures” when asked to “write” is still showing you that he or she knows a lot about writing.  They know that the marks they make on paper can be a way of delivering information.

The second line contains what many would call “scribbles,” but an attuned eye would notice the similarity to text in our own culture.  The horizontal placement and combination of curves and straight lines reflects a child’s experiences with printed text.  Imagine looking at a piece of work written in an unknown language using an unknown system of symbols to communicate meaning.  Your first attempts to recreate it from memory would probably appear a bit like scribbles, too.  It is a normal progression of development for children to express themselves through scribbles and pictures to help them communicate their knowledge or feelings through writing.

Next in the line up is the line of “letter-like symbols.” The child is getting closer to understanding and recalling the shapes used in our written language, but form and directionality are not necessarily obvious to the child yet. Babies spend a large amount of time learning that an object remains the same no matter what is done to it.  A blanket can be flat, rolled up, right-side up or torn in half and it is still a blanket.  When we throw letters and numbers into the mix, children find directional rules perplexing. It takes time, experience and brain growth to accept and understand the special rules for writing.

The next step is actually missing from the image above.  It would include a string of random letters.  Children who write in this way know that the shapes of the letters are important.  They are simply still working on the idea that the order of the symbols changes the meaning of the text.

The next developmental progression has a pre-requisite.  In the example “ILM” the child is using the first letter-sound in each word to represent the entire word.  Before a child can write in this way, he or she must have lots of experience identifying beginning sounds in spoken words. A child writing in this manner shows me that they understand some of the auditory relationships between spoken and written language.

The second to last example tells us that the child is beginning to hear some middle and ending sounds in words, as well.  Another possibility is that the child is not yet hearing vowels (the most difficult to discern), but does have a few traditional spellings memorized, such as “mom.”

The final example is written in traditional “adult print.” It contains all of the letters and spaces an adult would use.  Pre-K children are not expected to get here by the end of Pre-K.  Most Kindergarten students will not be here by the end of next year.  Of the few Pre-K and K students I’ve worked with who were reading at a first or second grade level, none were writing like adults on a consistent basis.  They are not supposed to. Their brains just aren’t there yet. It is O.K.

For the first few weeks of school, we focus on convincing the children that they CAN write.  They are Pre-K children and are expected to write like Pre-K children.  Once we succeed it is much easier to help them progress.  You can help in a couple of ways:

Earlier this week, three of our fourth grade friends presented us with a puppet show.  They had spent three weeks writing the script, practicing their lines, and preparing for the show.  We adapted the bottom of the loft with some silks and created an instant puppet stage for the performance.  The story was pleasantly silly and just the right length for our wiggly Pre-K friends.

The best part about this show, however, was that it inspired our students to create their own puppets shows all week.  Although many of the stories involved the store-bought puppets used by the older children, personal puppet creation has also been a big hit.  We seem to be producing at least 8 new stick puppets a day.

We’ve been witnessing lots of learning throughout the process.  On the first day, the children wanted to make a puppet theater in another portion of the room.  Once the silks and the clips were carried over, it took some serious experimentation to find a way to create a hidden spot for the puppeteers.  After the stage was set, many negotiations were needed to figure out how a shared story would go.  Would she have to be the bad guy? Would he have to be the dog?  Could she tell the whole story and everybody else just do what she says?  Now that we are on day five of this type of play, the road is a bit smoother, but we’re also getting better at navigating the bumps.