Big discussion this morning in the forest: What made this hole?  The first discovers were sure it was a snake.  Laughing, screaming, and yelling warnings while running through the woods followed.  This brought the rest of us in for closer inspection.  Many assured us that it was definitely a snake hole.  That is until we were presented with another idea.

MF:  Mole holes have the dirt pushed up around the edge like this.  Moles are bad. My grandpa has them all over his yard.  We put little yellow worms in that the moles don’t like and they go away.

VJ:  Snakes don’t dig holes.  They slither and there are no slithers here.

GS:  Yeah, moles are good for the world.  They help trees and plants grow.

After this discussion, some of the children remained to contemplate the origins of the hole.  The rest ran off to run from the attacking moles and snakes.  It appears it doesn’t matter what is attacking, it’s just fun to run around hiding from the imaginary threat.

This morning’s weather proved to be little finicky as it rained on and off for over an hour but that didn’t deter our youngest explorers. We prepared ourselves with boots and raincoats and then embarked on the great outdoors to enjoy the unseasonably warm day. It wasn’t long before a student noticed a small worm making his way up the side of boulder. We theorized about how he was able to hang on to the rock without any arms or legs. We studied how his body would shrink and then stretch as he so effortlessly moved across the rock once he reached the top. Then, before we knew it, there were two worms crawling across the rock. One student proclaimed that there were so many worms out because it was raining and worms love water. The students took turns gently touching the worm and then squealing with joy. It always amazes me what wonderment can be found on what might seem like a dreary day.

This week, we had the opportunity to introduce the Fairy Tale Trail to the Pre-K students. It is one of our smaller trails, but has been beautifully embellished with a variety of whimsical decorations from the older students. Today, we were able to spend an extended period of time exploring the ins and outs of the Fairy Tale Trail on our Forest Fours day. It didn’t take long before the children made an exciting discovery! Someone had taken three of my painted “Story Stone” houses (that were meant for the small world table) and placed them on the Fairy Tale Trail! They naturally thought that I had placed them there but after learning that I had nothing to do with it, they had decided that fairies must have used their magic to put them on the trail and turn them into fairy houses. Fairy magic is some pretty amazing stuff!

Now, they are commissioning me to make more fairy houses that can live on the trail. After all, winter is coming and every fairy needs a place to live. So don’t be surprised if you show up to school only to find me stealing rocks from the playground or covered in paint in the classroom. It’s messy job but someone’s gotta do it!

Goodness! We have had a whirlwind of discoveries this week. We’ve found “frogs” hanging out on our log circuit, mysterious yellow goo appeared on the wood chips, towers of blocks curiously refused to crumble, and the ramps in the construction zone have found configurations unseen before.  Oh, and I almost forgot! There has been a rash of author sightings within these four walls.  With so many options, it’s hard to choose what to research next…

Last week, one of our students discovered a big, green caterpillar who was walking along the sidewalk that leads to our parking lot. We brought the plump little guy into the classroom so that the other children could observe him as well. After placing him in a clear container, we noticed that he had positioned himself near one of the top corners of the container and had started making long strands of silk from one side of the container to the other. Some students thought that perhaps he was growing more hair, while others knew right away that he was making a cocoon.

With the help of our fabulous science teacher, Ms. Capezzuti, we learned that our new friend was a Polyphemus caterpillar and would eventually turn into a moth. We also learned that Polyphemus caterpillars are silk caterpillars and can easily be reared indoors, so we decided to let our him finish making his cocoon in our container and release him after his metamorphosis. According to our research, he should emerge from his cocoon in about a week. In the meantime, we observed him while he finished making his cocoon and have been noticing what he looks like now that he is in his pupal case. We are looking forward to seeing him emerge from his cocoon, stretch and dry his wings, and then release him back into the wild! Yay, science!

The decorations from Applefest made a comeback this week.  Our hard-working custodial staff gathered up all of the corn stalks from the festival and prepared them for final transportation to the dumpster or compost pile.  (Un??)Fortunately, our class found the pile first.

One child knew right away what treasure lay buried within the stiff green layers.  Once corn was officially discovered, husking (or “shucking” as Mrs. Forst says) became the activity of choice. 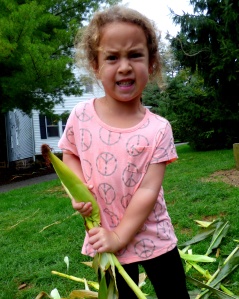 Yet, they never gave up.

And the reward was worth it.

As always, persistence pays off.