A little while ago, we realized we had a visitor in our class.  This little friend was attempting to pick out a lovey (we think?)  Being kind hosts, we created a special place in our classroom for our visitor to hang out safely.

We learned that our new friend needed special food.  Hamburgers were just not going to cut it.  We also found out that it required hiding spots to feel safe and a small capful of water to drink.

Many names were considered including Buggie, Boogie and Spiderman.  After a class vote, “Ellie” became the official name of our new friend.  (Although many still call her “Buggie.”  I’m including a picture at the bottom of this post, but I should warn you, if you are not a fan of spiders…..close this window now.

Ellie inspired us to find out what type of spider she might be.  At first, we thought she was a Grass Spider.  Then we realized that her abdomen is not the right shape.  We’ve also observed that she is not making webs.  Our current thought is that she is a wolf spider.  If you have a different idea, let us know in the comments.  We can always take ideas from “the experts.”

A few times each week, we go foraging for food for her.  We’ve put in ants, mites, pill bugs (isopods) and unidentified teeny tiny bugs.  Soon, we will need to let her free to roam before the cold weather hits. 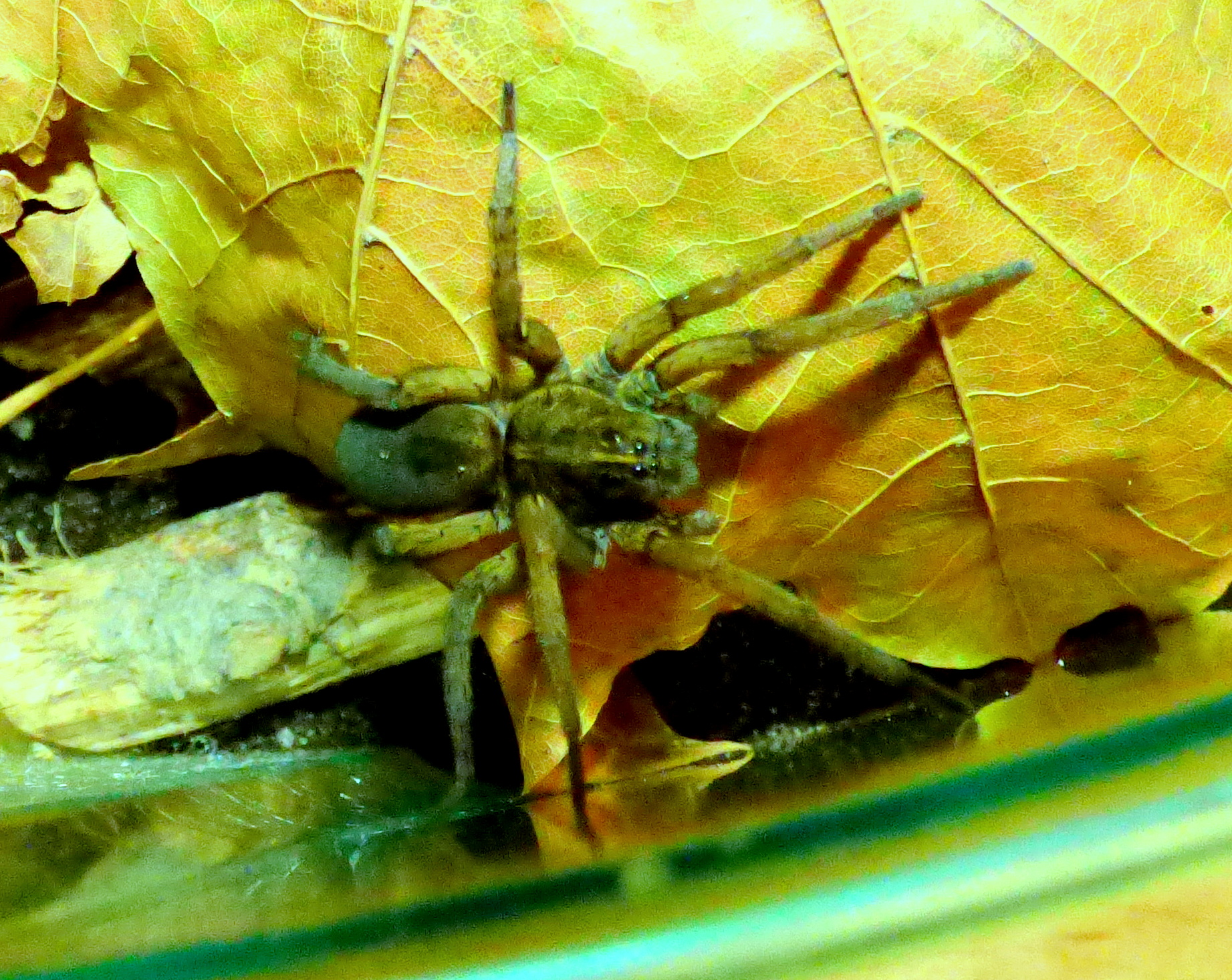 (Scroll over the images for the captions.)

Are all spider webs the same? This was the question of the day.  Following a week and a half of enthusiastic web designing in the loft, we thought we’d look into the facts of the issue. In our research, we discovered that almost all spiders make silk.  Many use them to make webs, but not all of them.  Spiders produce webs using a spinneret, which is a small opening on the abdomen.  Spiders use their legs to manipulate the web into place.  Different kinds of spiders produce different types of webs.  The main web types that we learned about are:

We read about an idea to “capture” spider webs on paper and bring them inside, but we are still trying to decide if it would be harmful to the spider.  Sometimes “think[ing] of the comforts and rights of others,” includes nature, too.

Our most disgusting revelation of the day came from our discovery regarding the eating habits of spiders.  After they catch an insect, many spiders wrap up their dinner and then suck out their juices later. Ew. We all decided that we are quite glad that we are not spiders.

Mrs. Pless and I can’t wait to see you tomorrow night.  Our classroom is being transformed by our eight-legged friends.  Parents’ Night begins in the Multi-purpose Room at 6:30.

And now…onto bugs.  I think this may be a record.  This is certainly the earliest we have ever had a group collectively inspire a topic of study.  Within the first few days of school, the children were noticing our creepy, crawly friends.  Some were exclaiming their excitement while others became paralyzed by fear.  We realized that there is a lot we can learn about bugs that might help us with our fears and make us even more adamant junior entomologists.

We asked the Pre-K class to share any questions they had about bugs:

We’ve talked about how bugs are very small, living creatures that are much more afraid of us than we are of them.  We continue to spot new bugs on the playground every day. During our spider investigation, we learned that spiders have two body parts, an abdomen and a head.  We inspected many plastic, paper, and even a few live examples of spider specimens to check our estimates regarding the number of legs they might have.  (All of the children can now proudly state that there are eight!).  We used this knowledge to create our own classroom arachnids.

Now that we have a room full of spiders, we need someplace for them to live.  When the question was put to the children, they suggested that we needed a forest.  Of course our concurrent discussion of bats inspired others to create a comfy cave and fancy, pink bat-house, as well.  As you can see from the picture to the right, one student noticed that we were missing the sky and a sun.  He quickly remedied this dire situation.

In a separate activity, the students were asked to use one to one correspondence and number recognition to create lunch for some hungry fruit bats.  They used orange play dough to roll “fruit” for each tree.  We were practicing accurate counting from 1-10.  At this stage, we expect them to begin to develop and consistently use reliable counting strategies.  For example,they might touch each object as they count or move one object at a time to match each number they say.

One of the most difficult parts of this task in Pre-K is the tendency to forget that counting is needed.  Generally, the children start counting as they create balls of dough, but get either overwhelmed or over enthusiastic as they progress past five.  One of the skills we work on is to “go back and check” as they count.  We frequently ask, “How many do you have now?” and “What number were you trying to make?”

This past week, we also introduced the use of the “Listening Center”.  Most of you are familiar with this school staple.  Our first book was Bats Around the Clock, by Kathi Appelt.  We practiced the ancient tradition of turning a tape recorder on and off (something that I’m sure they’ll never need to do outside of an early childhood classroom). After listening to the story, the students wrote about something that happened in the book.  Throughout the year, a few of these “book reports” will make their way into the children’s portfolios for your enjoyment.

Our current math unit introduces and reinforces the concept of pattern creation and continuation.    Luckily, Halloween provides us many opportunities to practice and play with these ideas.  We were inspired while reading Six Creepy Sheep, by Judith Ross Enderle and Stephanie Gordon Tessler, and created some creepy decorations of our own.  In the picture on the left, one of the students is preparing wooden beads in an orange paint bath.  We also mixed up some lovely green, goblin beads.  When they dried, we drew faces on them to give them a bit of character.  Next, we strung them in an ABAB pattern on some skinny, wooden skewers.  To keep the beads from falling off, the students used  Model Magic to fashion a pumpkin and a round cap for each end of the stick.  (Note: If either end pops off, simply add a bit of white glue, stick it back together, and let it sit over night to dry.)  Finally, each child sorted through a large pile of wooden letter beads and found the blocks needed to make their own names.  These were strung on ribbon and laced through the pumpkins so that the project could be hung from a door handle.

Much earlier in the week, the children became very excited over some cobwebs we found outside.  We decided that, for the upcoming holiday, a web would make a lovely addition inside our room, as well.  I prepared the weaving area by making a large X with an additional center line out of yarn on our play awning.  The children we then each given a turn with the roll of yarn and off they went!  I’m actually quite impressed with how it turned out.  They each took their time planning where they wished to place their string.  The result is nicely spread out and surprisingly “webby”.  On Friday, we made spiders out of pipe cleaners to adorn our creation.  I’m interested in seeing if the spiders will become a popular plaything next week.