In the past few days, the students have started showing a budding interest in keys. It began one day when two students asked to borrow our “teacher keys” to experiment with how they worked on the classroom door. Then they tried the outside door. They began to notice that certain doors only open with certain keys. When they realized that Mrs. Forst had more keys than I did, they wondered what the other keys could be used for. 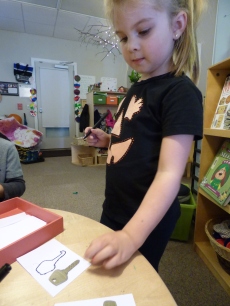 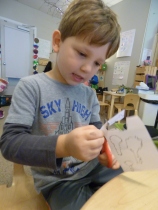 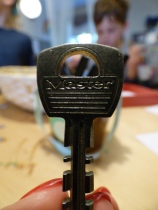 As the interest started to grow from just two student to almost eight students, we thought that perhaps a morning provocation could expand the students’ knowledge of keys even further. This morning, we put out a giant bowl full of keys, some paper, and some black markers. The students began tracing the keys and noticed that there are many different sizes and shapes of keys. One student exclaimed, “I found a master key. It says ‘MASTER’ on it and this one is for a safe because it has an ‘S’ on it,”. Another student traced the keys and then cut them out so that they could play with them at home.

At morning meeting, we continued our conversation when one of the students mentioned that sometimes you need a locksmith to open doors for you. The students are still unsure of what a locksmith does exactly but are excited to find out! Marie and I are quite interested to see where this new found interest will take us!