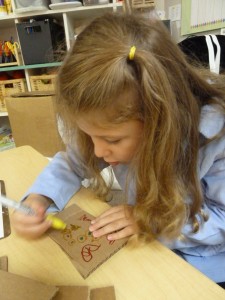 The interviews a few weeks ago have inspired much play-acting.  Our box theater has been used at a television, a house, and a puppet theater.  Along the lines of the television, the children created remotes so they could have more control over their viewing.  Some of the remotes included specific keys such as numbers.  Others sported a bevy of colors, reflecting the children’s love of markers.

While in use, the remotes have accessed many homespun channels.  Here is a list of just a few:

After the creation of our television/puppet theater, one of the student’s donated a puppet theater for our use.   This addition to the classroom has been very popular.  We have regular requests to “come see the show”.  Mrs. Pless and I are encouraging the use of the white board on the front of the theater.  Children may use the dry-erase markers to write the name of their play.  So far, we’ve had shows entitled, “Puppets” and “Puppet Show”.  Maybe we can convince them to branch out a bit in this area?

(Note: Although it looks like Mrs. Pless and her lap-mate are not paying attention to this show, this frame was taken from a short video.  They were, in fact, a well engaged audience.)